***Have no fear you Dancing Queen! This is a Non-Spoiler Review.**** 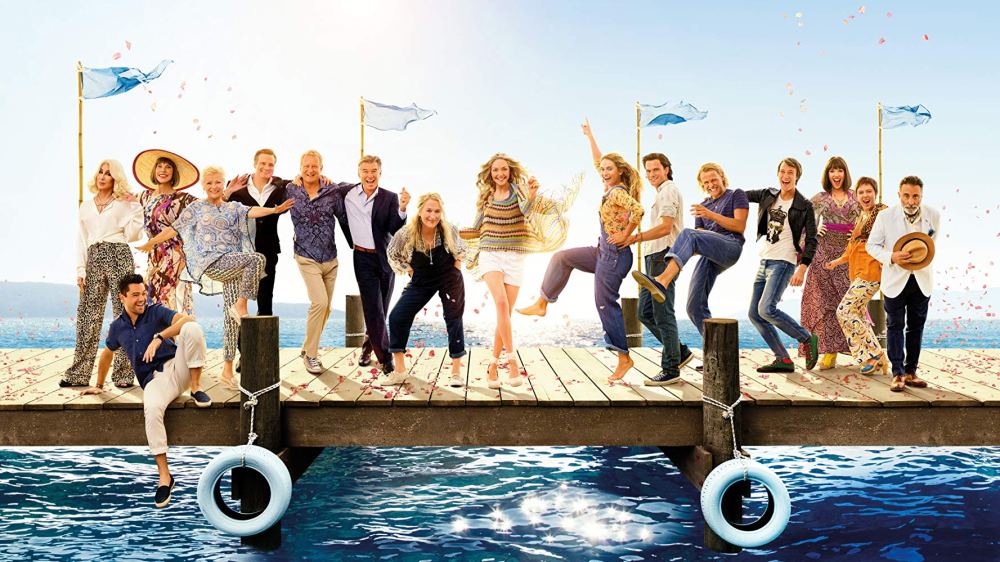 A long time ago, in the simpler time of 2008, a movie about a young girl inviting her 3 possible fathers to her wedding captivated the world. Mamma Mia! became the highest grossing live-action musical of all time until it was recently surpassed by the live-action Beauty and the Beast in 2017 and most notably, it was the highest grossing film directed by a woman until the Patty Jenkins directed blockbuster, Wonder Woman.

Now it’s ten years later and it’s time to step back on that disco fueled, glitter infused ABBA train. All our old favorites from the first film have returned although Donna, played by Meryl Streep, has a significantly smaller role than in the original. We follow Sophie, played by Amanda Seyfried, as she is getting ready to reopen the hotel her mother started. Amongst the chaos of the reopen, she also learns she is pregnant. This revelation prompts Sophie to wonder how her mom dealt with raising her on her own which leads into various flashback sequences of how young Donna, played by Lily James of Cinderella & Baby Driver fame, came to meet her three lovers.

Ol Parker takes over as director and screenwriter for the sequel but doesn’t quite capture the magic and flow of the first, directed by Phyllida Lloyd & screenplay by Catherine Johnson (who wrote the original musical for the stage). However, there are moments that this movie really shines and leaves you with that warm, fuzzy feeling. The stars of this film are the new cast playing the younger versions of the characters we knew & loved from the first film. James completely embodies her role as young Donna. She commands the stage during her musical numbers and breaks your heart in the more tender moments. Her ‘Dynamos’, Jessica Keenan Wyn and Alexa Davies, are spitting images of their older counterparts, possessing all the flair and wit that Christine Baranski and Julie Walters brought to the roles. As for the men, they each compliment James with their charm, personality and singing abilities, which are far better than their older counterparts….(Sorry Pierce.) Hugh Skinner, Josh Dylan, and Jeremy Irvine handled their roles perfectly and they were a joy to watch onscreen.

Of course, you can’t have a musical based on ABBA songs without an awesome soundtrack. Some old favorites are brought back along with some new additions, helping the film feel fresh but familiar. I won’t spoil any of the choices they made, but as an audience member, I was swaying back and forth in my chair for most of the numbers.

Speaking of musical numbers, we haven’t even gotten to the surprise hit of the movie, Cher! That’s right. Cher plays Sophie’s grandmother, in the role she was born to play, considering Ol Parker had her in mind while writing the part. Cher embodies the over-the-top, Vegas grandmother character like only Cher can. When she sings, you feel the power of a performer who has done this millions of times. Her presence takes over the room, in a good way. She added much more joy to the film than I thought she would and she was a welcome addition to the cast that had me smiling every time she appeared.

Overall, this film is a worthy successor to the first Mamma Mia! film. I never wanted the flashback sequences to end due to the powerhouse performances of the new cast. The returning cast played their parts and kept the nostalgia factor high. This is a fun, easy-going summer musical that will leave you in a better mood than when you entered the theater. That’s the power of ABBA!

***Don’t forget to stay for the beginning of the credits. This mid-credit scene is worth the price of admission and possibly my favorite part of the movie! Also there is a short scene at the very end, but in my opinion it is not worth staying for.***